FULL SCHOLARSHIPS to STUDY in GERMANY

Germany offers a wide range of courses covering many disciplines in its 381 officially recognized institutions of higher education in over 180 towns and cities throughout the country accounting to 14,000 DEGREE PROGRAMS. Most Universities in Germany are public and funded by the federal government. Many German universities are in the top 100 world rankings, having both tradition and excellence in teaching, and where many Nobel laureates have studied; so there isn’t a doubt that you will receive extraordinary education.

German is the language of instruction in most higher education institutes with exception of some programmes instructed in English. Besides having adequate educational qualifications applicants need to have German language skills at a level that enables them to meet language requirements needed for academic study.

German language courses/levels -The Fast Track which is being taken by majority of students who plan to study in Germany consists of six levels. Level:- A1, A2, B1, B2, C1 and C2

The A1 level will be conducted in Sri Lanka and all the other stages will be conducted in Germany. Once you learn the basics in the German language from A1 level in which you will be able to converse at a basic level in German, you will be able to master the language upon your commencement of the rest of the levels in Germany. The advantage you will be receiving at this stage is the fact that you will learn the language in the native country among native speakers. The exposure and experience will benefit you to fluently speak this exciting language in a very short time. Once the students complete the German language course in Germany in approximately one year; they can begin their university higher education at any State-Funded universities in Germany, at absolutely ZERO COST!

PGC work with approved German PATHway colleges through which we will secure students the admission letters for visas once the complete A1 stage.

STUDY Bachelors |Masters | Post graduate studies in the fields of 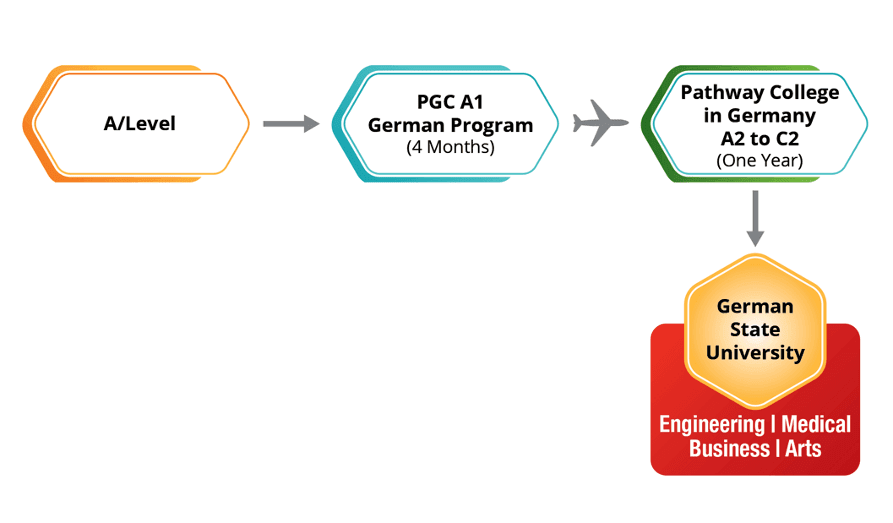 Book an appointment with an educational adviser

Save page as PDF

NOTE: Due COVID the programme is delivered ON-CAMPUS and LIVESTREAMED (Virtual Classroom). Students could opt with which platform they wish to study. The livestream online classes makes a student to participate in PGC programmes from anywhere in the world.

Please Note: German pathway colleges admission can be arranged in every 6 weeks

Excellent Bachelor’s and Master’s Degree in the same or related scientific field.
Clearly formulated thesis proposal with detailed research timetable and list of publications.
Résumé with no gaps and showing clear academic or professional career pathway.

Submit your application early enough to obtain visa without a rush.

Apply for the correct visa! Tourist and language course visas cannot be converted into a “student visa”.

Schedule your trip to Germany so that you have sufficient time to take care of the administrative obligations.

Enrolment is a prerequisite for obtaining the “residence permit for purposes of study”.

Make sure your passport is valid for your entire stay. However, if your passport expires while you are in Germany we will help you extend your visa.

Once you reach Germany and if your study program should last longer than 90 days, you must apply for a residence permit in the town or city where you are studying. The residence permit is initially issued for two years but can be extended each time for a further two years depending on your academic progress. After graduating successfully in Germany you can apply for a one year extension for the purpose of looking for a job.

Upon receiving the conditional offer letters you need to apply for a student visa. The student visa is generally issued for a period of three months. We will assist and guide you with all the pre-documentation leading up to obtaining your student visa. Generally you will have to submit the following papers along with your visa application.

For further information on visa you could visit www.colombo.diplo.de

PGC partner pathway college organizes internships for students, graduates and postgraduates in local and international companies in Germany. We choose companies which have opportunities in industries closely related to the intern’s university major or particular area of interest. Through our extensive corporate client base we are able to offer placement in approximately 1000 German companies around the country and in some cases abroad.

Internships are for the most part unpaid. Paid opportunities may be available for skilled employment or seasonal employment. Remuneration in kind may in some cases be possible; for instance in the form of accommodation etc.

Students also can gain work experience through part-time jobs and be exposed to the German labour market and make useful career contacts.

International students are allowed to work in Germany during the study period under certain conditions. A part-time job may help you to subsidize your budget and reduce the burden of living expenses. An international student is only allowed to work 90 full days or 180 half-days a year. It is important that students do not breach the stipulated working hours as it is strictly monitored and restricted by labour laws in Germany.

Host Family Program-Living with a German host-family is one of the best options you can choose during your study period in Germany. This option to a greater extent helps you to learn the language fast and you will be able to experience the interesting intercultural connections in your environment. We have respectable families partnering who are most willing to welcome foreign students into their homes. They will not only help you advance your speaking, reading, writing and listening skills but also will make you feel at home and will provide you with care and guidance.

Student Dormitory / Youth Hostel-Student dormitory or hostel facilities are available on a shared basis with other students. This is in fact the most popular form of accommodation among students which is known in German as “Wohngemeinschaften” (WGs). Several students get together and share all the facilities in the apartment whilst which each student may have their own room.

Flat / apartment- If you are an independent learner and prefer to live on your own, a small apartment may be ideal for you. apartments are freely available in around universities you can choose an apartment based on your preference.

Book an appointment with an educational adviser

Save page as PDF

Get In. Get Support. Get Started.

ENROLL Online is 10% OFF

Study via online in real time or attend classes on campus!

Learn what students experienced with PGC and what they do now! Read our Testimonials.

Our webinar series include open days, workshops and general informational sessions. For technical support in registering, contact IT team at 2502012. Click on our Webinar page to visit.